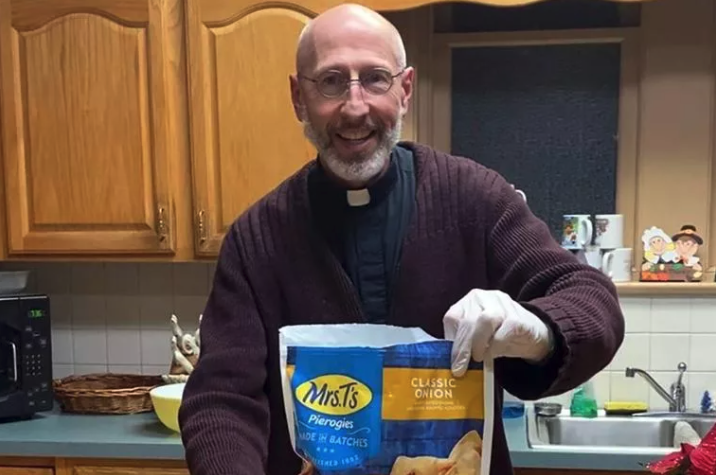 Cooks With Collars and Pierogis for Beginners

Pierogis bring back family memories for Msgr. Thomas Orsulak of Reading, Pennsylvania. “My Slovak grandmother used to make them from scratch,” he said. “It is like comfort food for us.”

For those following the Catholic food world, Cooks with Collars will sound familiar. A cooking competition launched in the Allentown, Pennsylvania, diocese in January, it featured more than two dozen priests in an online competition to raise funds for local parish communities. The event was a great success and brought in more than $220,000.

Among those participating was Msgr. Thomas Orsulak, pastor of St. Peter the Apostle Catholic Church in Reading, Pennsylvania. He did not win any first- or second-place ranking, but as he admitted, he is not a cook, nor was he raised in a cooking-centric family. But his family background was definitely all-Catholic.

“I grew up in a Catholic home in Lansford, Carbon County, Pennsylvania,” he said. “We lived a block away from one church and across the street from another. I went to Catholic grade school and high school and received all the classic formation from classes — first penance, communion and confirmation. And I started thinking in my junior year about attending seminary.”

Why did becoming a priest appeal to him? He admitted that when he was in high school, he met several wonderfully happy priests who enjoyed their work. And his pastor was a young, energetic man who suggested that the young Orsulak should investigate becoming a priest. “Of course,” he said, “God was calling me to do this. God’s hand was in this.”

As a result, he attended three different seminaries, and was ordained from the former St. Mary Immaculate seminary in Northampton, Pennsylvania. He added that his parents were “optimistically cautious, but supportive and happy.” And once ordained, he served in several parishes before he was finally named pastor at his St. Peter the Apostle in 2005.

As for cooking, several months ago, he got a call from the development office of the diocese, telling him they were putting together the program, Cooks with Collars, to raise funds during the pandemic. They had already called several priests who would be willing to make a little video of their preparing their favorite food. Folks then would be able to view the videos on the diocesan website, and thereby the diocese could raise money for that priest’s parish.

But Msgr. Orsulak admitted that he was dubious about participating because he always preferred to have someone else prepare his meals — he had been cooking for himself only since the pandemic started, and his main kitchen prep had included cooking pasta, or mac-n-cheese, or grilled cheese sandwiches, and sometimes a soup from scratch.

“The only reason I did agree,” he said, “was because they asked me. The person who called was wonderful. I wanted my dish to be simple and quick, so I contacted a local Polish priest. He showed me how to make pierogis. He boiled up some pieces and fried them in butter with onions on top.”

Since this event was taped, Msgr. Orsulak offered the pierogis to the camera person because pierogis are quick to make — and delicious. And pierogis bring back family memories for him. “My Slovak grandmother used to make them from scratch,” he said. “It is like comfort food for us. Now pierogis are inexpensive to order, but before, families made them at home years ago.”

Apparently, the event was such a success that the diocese is hoping to do it again next year and maybe kick it up a notch — and he will probably do it again. As he noted, “This is not just a fundraiser but a ‘fun’ raiser to connect people in this time when we are so disconnected, especially pastors with parishioners.”

Note: to view his cooking session, click on this video: